Fun with the Functional Web Framework

This talk is a follow-up of a talk that Arjen Poutsma has been giving a few years now, called ‘New in Spring 5: Functional Web Framework’. In his new talk he goes more in depth in some of the features that are offered by the framework.

The Spring functional web framework (called WebFlux.fn) is an alternative to the annotational style web framework, Web MVC. It was introduced in Spring 5.0 and for spring 5.1 they did some refinements in the API after feedback from developers.

The first one was to create a web framework with a functional style. By this they mean that they wanted to leverage the new functional concepts introduced in Java 8, like Function and Stream.

The second goal was to make the framework fully reactive by using the functionality from Reactor.

The third goal was to act more like a library and less like a framework. The reason for this is that many people don’t like the “automagic” things the Web MVC (annotational style) framework does. Web MVC does a lot of things behind the scenes that you as a client of the framework don’t know about, unless you read up on how the framework works internally. So acting more like a library instead of a framework means that a lot of things will be more explicit, so you as a client of the library will see more clearly what is going to happen.

A fourth goal, that was more a side effect than intention, is that there is no more reflection in WebFlux.fn. By not using annotations anymore to map HTTP requests to controller methods, there is no more reflection. This has the great effect that your application will take less time to start up because Spring has to do less classpath scanning. This is also useful for when you want to use GraalVM.

How does it work

There are three main concepts in the WebFlux.fn framework:

We’ll discuss these in the following sections.

Is a function that maps a ServerRequest to a Mono<ServerResponse>.

You can see in this example that there are some differences with a Web MVC controller method.

A big difference is that we can only get a ServerRequest as a parameter. So if we want a path variable, body or anything else from the HTTP request, we have to get it from the ServerRequest variable. Spring does not inject this information as method parameters in WebFlux.fn.

The second difference is that the object we return has to be a Mono<ServerResponse>. In Web MVC the return type could be a lot of different things like any type of Object, a ResponseEntity, etc.

An advantage of the RouterFunction over the annotational style is that you can map multiple endpoints to the same HandlerFunction. This is not possible in Web MVC because you can only put one @RequestMapping on a controller method. In the WebFlux.fn framework however, you can refer to one HandlerFunction in as many RouterFunction matchers as you want.

Improvements in the RouterFunction spring framework 5.1:

Is a function that maps a ServerRequest to a boolean.

This is used to match your HandlerFunction to a HTTP request. Spring provides a lot of default predicates for paths, accept headers, etc. But you can also create your own very easily, with lambdas, methods, or classes.

Similar to the class level @RequestMapping, but a lot more powerful.

You can choose on what you nest, depending on the needs of your software.

In WebFlux.fn you can couple HTTP requests for the same path, but different accept headers to different classes, as in the example above. Here you only define your path once which means no duplication, and it’s easier to change the path to for example /animals, because there is only one place where you have to change it.

It can be used for example for security, logging, timing, etc.

The functional web framework is a lot better

It is a very good alternative to the more common annotational style web framework Web MVC. The advantages mentioned definitely make it worth trying it out for yourself! 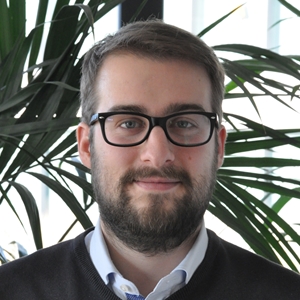 Pieter Van Hees is a Java Software Engineer at Ordina Belgium. He is passionate about Domain-Driven Design and producing clean software that works