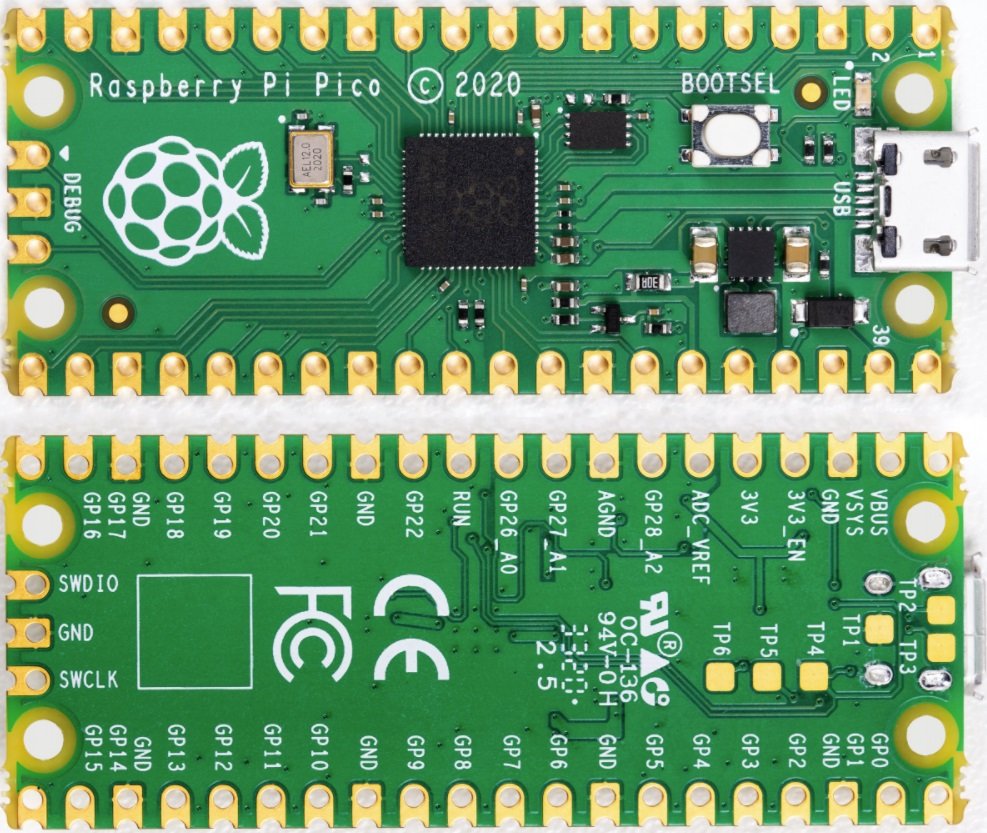 By now everybody likely has heard about the Raspberry Pi single board computers. And even more than probable some, if not most of you, have one or more of these.

Differences with the Raspberry Pi

Like I said in the introduction, the regular Raspberry Pi is a single board computer, as in an actual computer which can run a fully fledged operating system. It also has interfacing options like a display and camera port, along side ethernet and USB ports as well as the 40 GPIO pins. 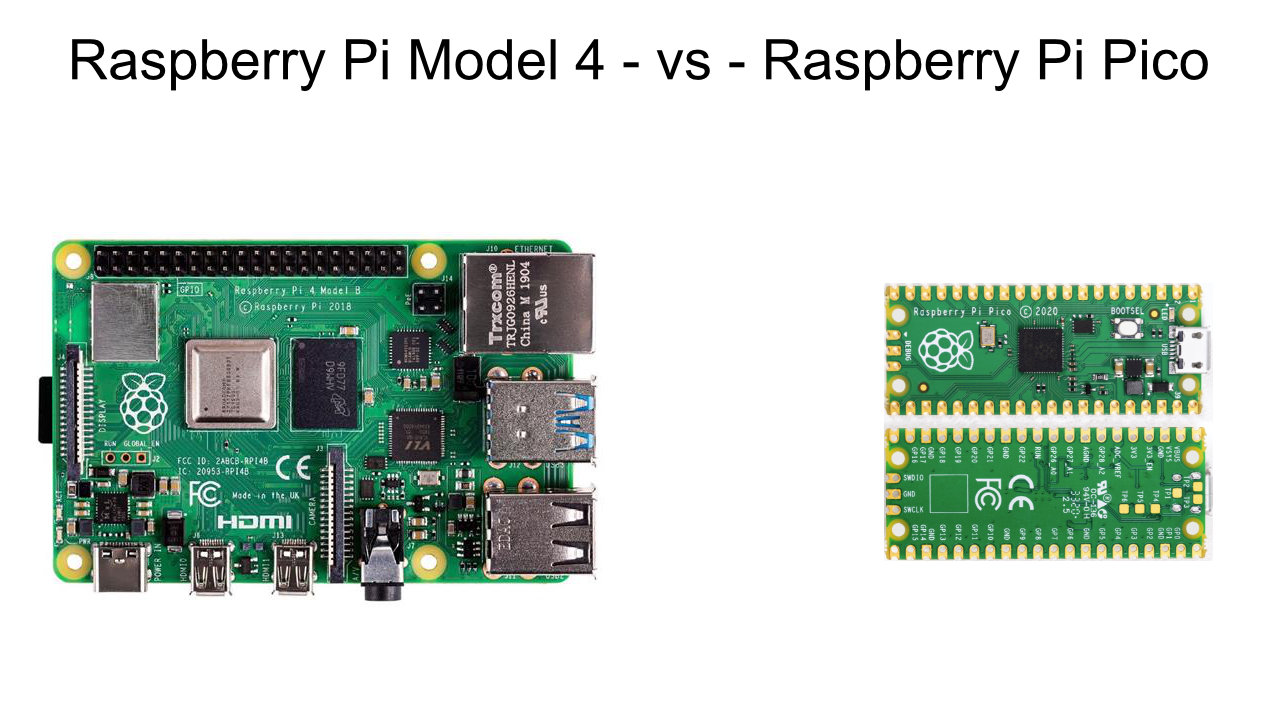 As you can see in the pictures, the Raspberry Pi looks like a tiny computer and the Pico looks like a much simpler board, because it also is. Both devices serve different purposes but do have some overlap. The Raspberry Pi is used for more computationally intensive tasks and can be used to run very complex software. The Pi Pico is used for far simpler tasks where power usage and device footprint are more important, it is a much more low-level device. While they both have GPIO pins, the ones on the Pi Pico are much more capable than those on the Raspberry Pi.

Getting to know the board

The main technical specifications of the Pi Pico are:

The Pi Pico is built around the RP2040, the actual microcontroller that powers it. There are other boards with varying pinouts and functions available with this microcontroller. In this blog post we will be focussing on the Pi Pico implementation of the RP2040.

The dual core chip give a lot of flexibility to create project which require a bit more processing power, as do the PIO state machines. With 26 GPIO boards there are loads of options to connect sensors, screens, inputs and outputs.

One of the nice features is that the Pico supports drag and drop programming/flashing. This is accomplished by utilizing UF2 files. The process of doing this is very simple, simply press the BOOTSEL button when connecting the Pico to your computer. It will show up as a storage device, drag the UF2 file onto it and the device will reboot and the flashing is completed.

The Pico has several development options available. Three different main options are available to program it:

Setting up for development:

One bright point is that Arduino will also be releasing a board based on the RP2040 so there is hope that the Arduino IDE will support it later down the line and enable hassle free C++ development for the Pi Pico and other RP2040 based microcontrollers.

Programming microcontrollers has long been done in C and C++ and the Pi Pico forms no exception to this. The basic code for a LED blink example is listed below.

This code will include the stdlib.h header file from the Pi Pico C++ SDK and will blink the built-in LED every 500ms. The trick is to compile this code and build the required UF2 file.

While the code looks and feels very similar to what you would write for lets say an Arduino board, compiling it and to run on the Pico is a different case. The contrast with Arduino development could not be bigger, where you simply download the Arduino IDE, write your code, click upload and you’re running your code on the device! With the Pico it’s not that simple. It requires a few dependencies which cannot be one-click installed and the instructions are different based on the OS you’re running. It’s do-able but it’s not exactly hassle free and convenient.

Contrary to the C++ development, using MicroPython is like a breath of fresh air. I’m not the biggest fan of regular Python but using MicroPython for simple microcontroller programming, has in my opinion, made it a lot easier. Another big plus of Python based development is having a REPL available. It allows you to write and execute code on the fly, which allows for easier development and testing something quickly.

First of all we need to prepare the Pico to accept and run MicroPython files:

The easiest way to do MicroPython development for the Pi Pico is by using the Thonny IDE. Thonny is a simple code editor that can directly save your code to the Pico and also provides an easy way to access the REPL.

Setting up Thonny is very easy. Just download the binary for your operating system, install and start it. Only one more step is required to set it up for use with the Pi Pico. Head into the preferences, select the interpreter tab and from the dropdown select the option MicroPython (Raspberry Pi Pico). Select the correct port from the dropdown. After this Thonny is ready to be used! 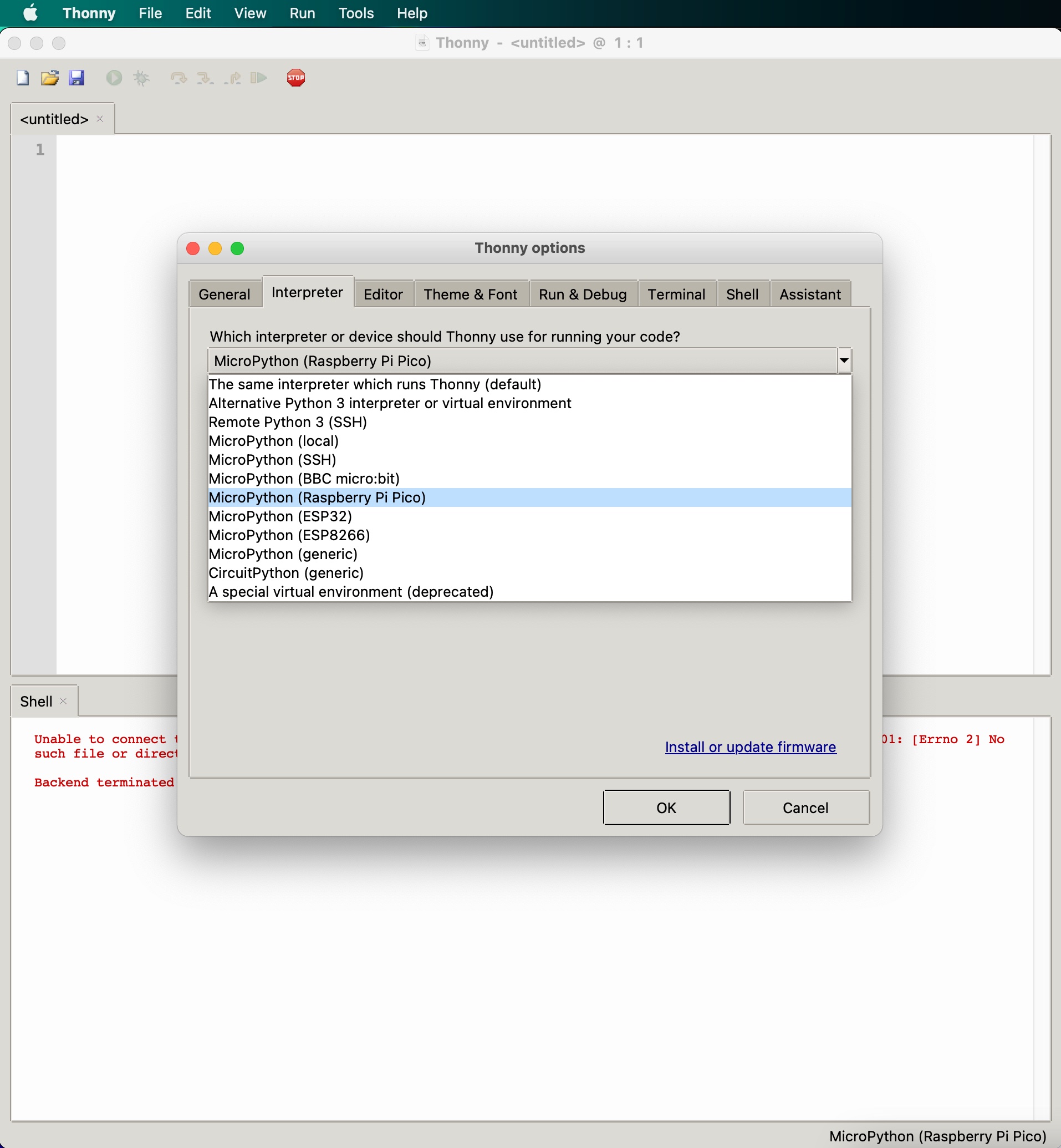 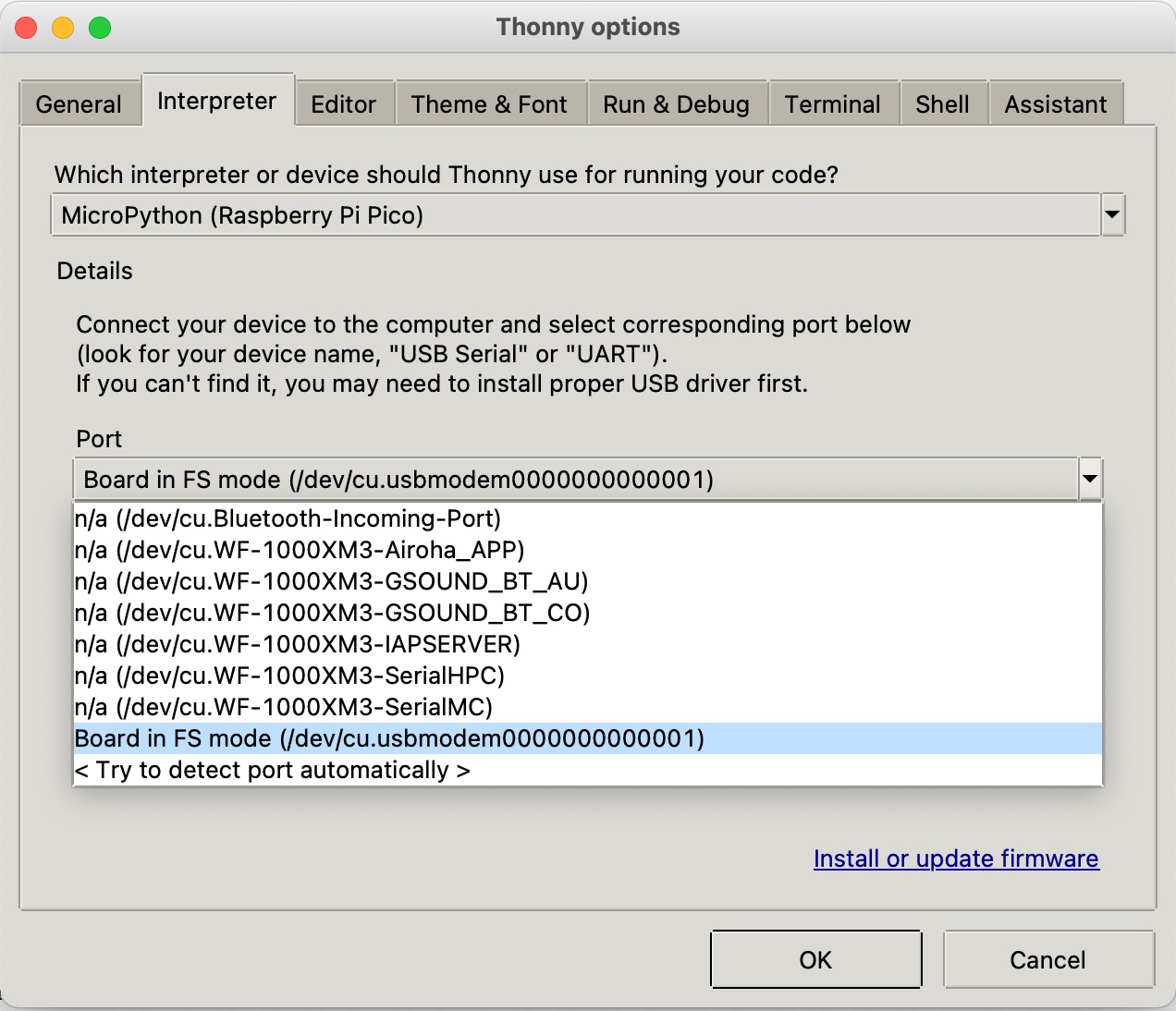 Another option for development is using the great PyCharm IDE. While I view Thonny to be a glorified text editor, PyCharm (from JetBrains) is a fully fledged Python IDE, for our purposes the community edition will do just fine. The setup is a bit more involved and has some caveats, but it is certainly workable. Download and install the PyCharm Community Edition. Once done, open it up and in the welcome screen select the Plugins option. In here, search for micropython and install the MicroPython plugin by JetBrains, this will add support for flashing the device from within the IDE. Now we can create a new project and write some code. To upload the code to the Pico, we need to perform some more changes and enable the MicroPython support for the newly created project. Head into the IDE preferences, select the Languages & Frameworks option in the sidebar and select the MicroPython sub option. In this section, check the Enable MicroPython support and set the device type to ESP8266. Finally, we need to enter the device path. You could try the auto-detect option, but on my machine that did nothing. To get this path, we will open Thonny with the Pico plugged in. It will show the device path under Preferences/Interpreter and we can copy it to PyCharm.

With this done, we can now copy over code to the Pico. Make sure your main code file is called main.py, as this will be executed automatically by the Pico. To do this, simply right-click on the file (or entire folder) and select the Run Flash FILENAME. Make sure you do not have the REPL open in the PyCharm terminal window, in contrary to Thonny, PyCharm will fail the copy action! If you have copied too many files or simply want to wipe the device, from the menu, select: tools/MicroPython/Remove All Files from MicroPython Device. To open the REPL and directly interact with the Pico select the tools/MicroPython/MicroPython REPL, this will open up a REPL in a terminal window. 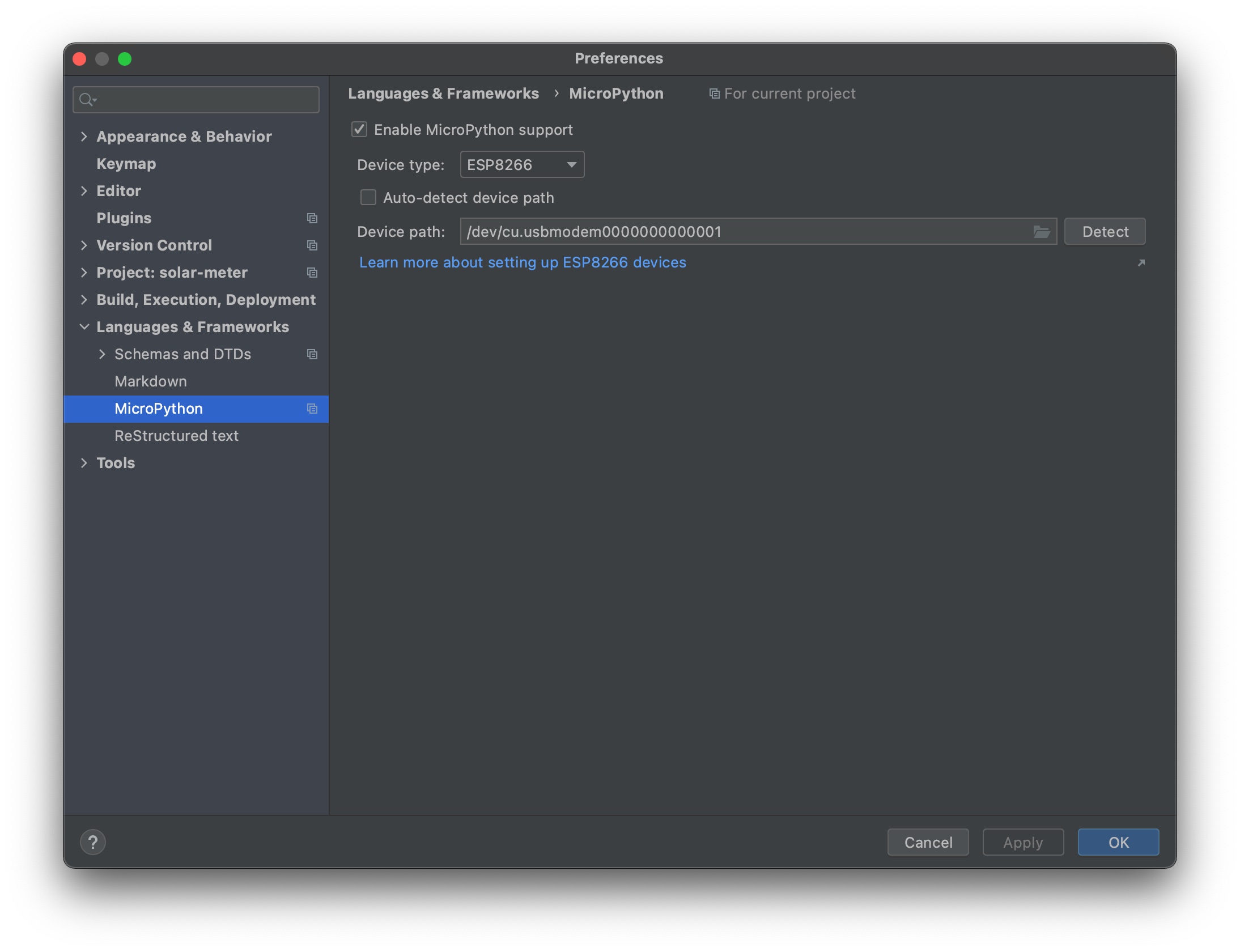 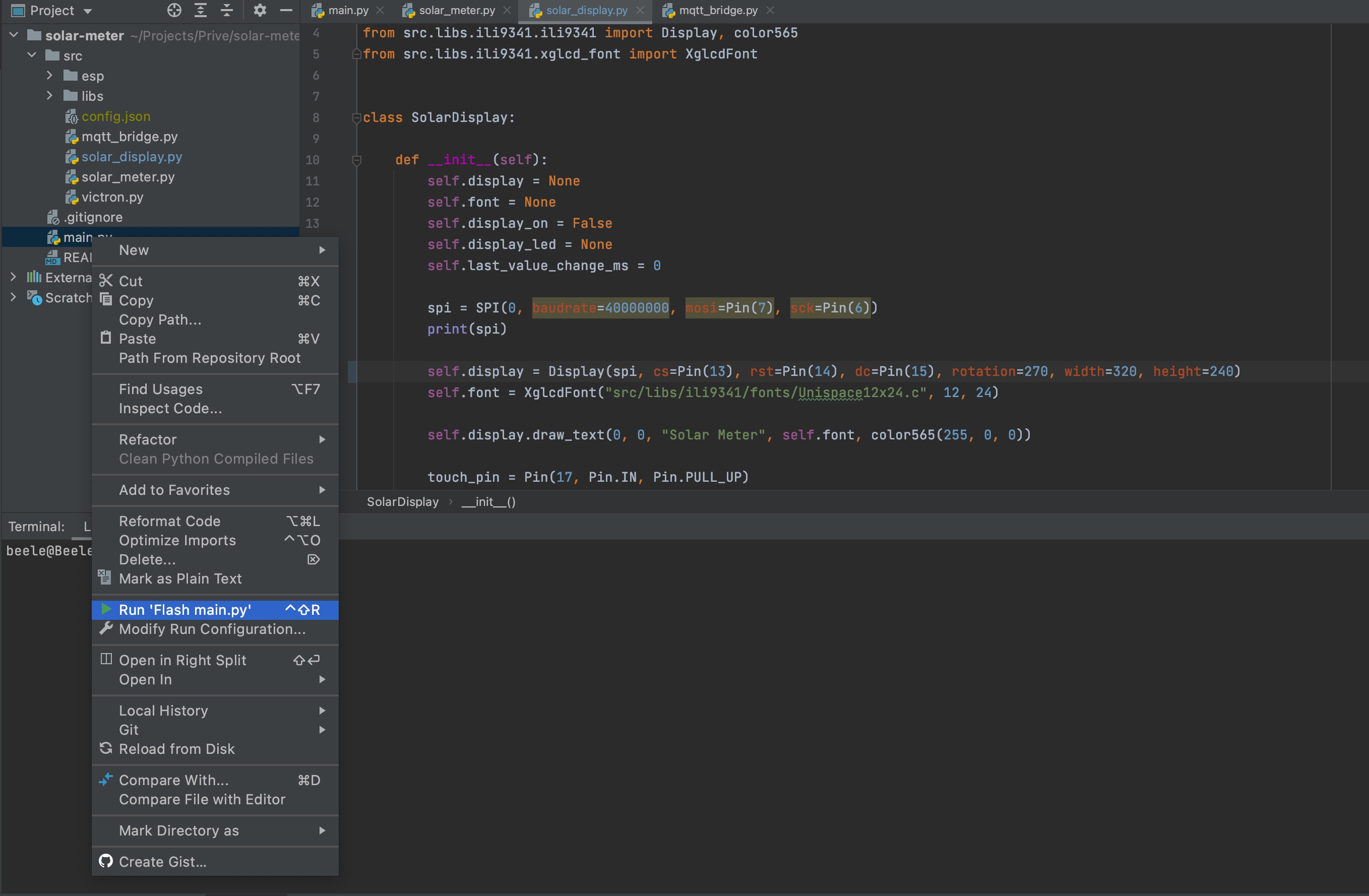 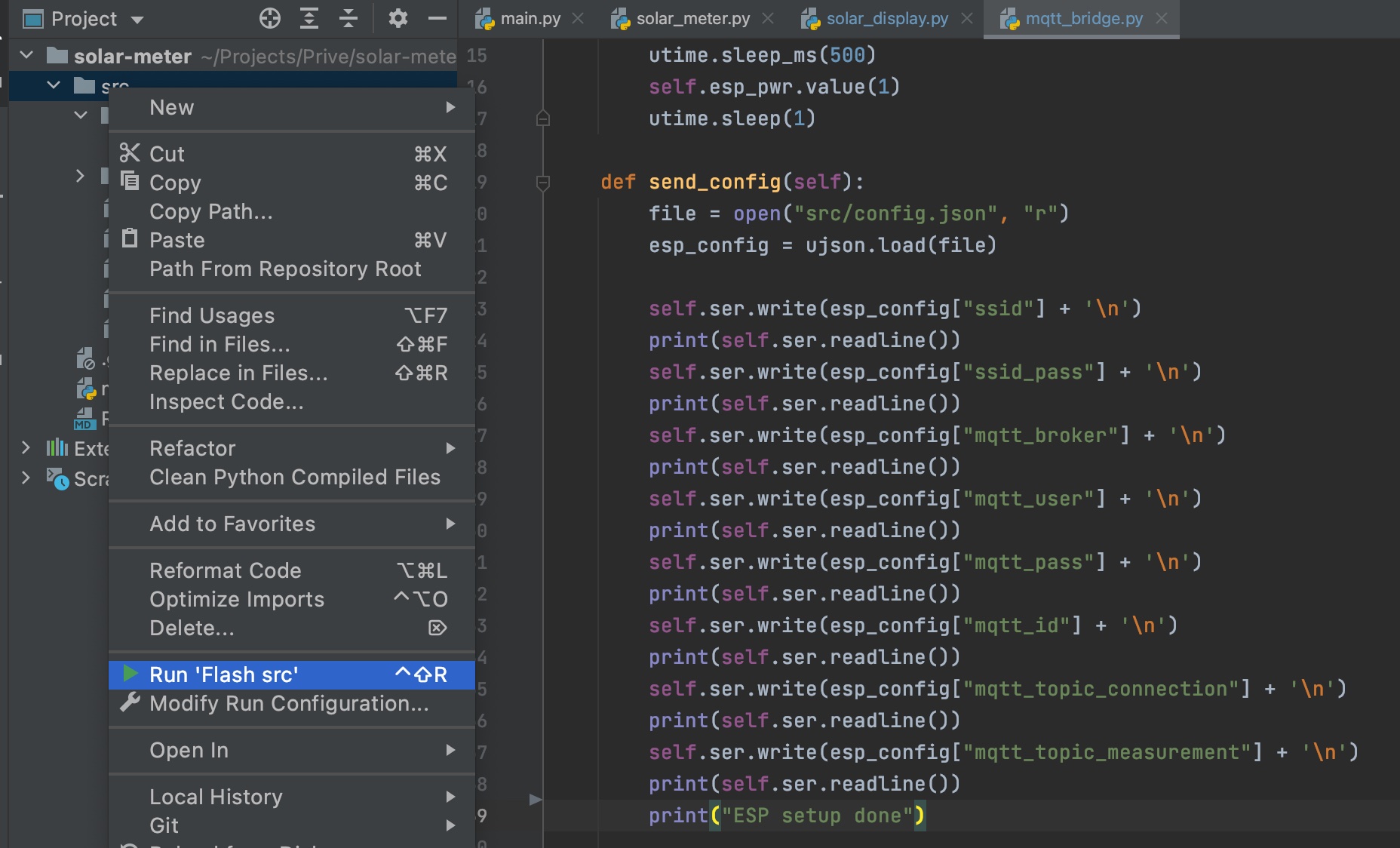 The basic code for a LED blink example is listed below.

This code does the same as the C++ code mentioned above. It however is far more readable. The MicroPython documentation has examples and information on what is available and what is not. Please be reminded that MicroPython support for the Pi Pico is still very new and some APIs may contain bugs, not work at all or even not be available yet.

CircuitPython is a variation on MicroPython created by Adafruit industries. It is targeted at beginners and students, and is even simpler than the regular MicroPython.

First of all we need to prepare the Pico to accept and run CircuitPython files:

Developing CircuitPython does not really differ from MicroPython except for two things:

Further in-depth information on how to get started with CircuitPython development can be found on their excellent website as we will be focussing on MicroPython in future projects.

The basic code for a LED blink example is listed below.

Again this code does the same as the C++ code mentioned above. It is also more readable, but differs slightly from the MicroPython flavour of Python. The CircuitPython documentation has examples and information on what is available and what is not. Please be reminded that CircuitPython support for the Pi Pico is still very new and some APIs may contain bugs, not work at all or even not be available yet.

Another thing to note is that the CircuitPython implementation has some additional pros and cons:

The Pi Pico is a nice little microcontroller that has a lot of potential. It isn’t particularly outstanding in features but it’s cheap and is backed by the Raspberry Pi foundation.

Being able to use MicroPython, or CircuitPython, is like a breath of fresh air. It allows for faster prototyping without having to deal with C/C++ per se.