An API or Application Programming Interface is a way of exposing your company’s digital services.

It is the layer through which your services communicate with other services.

API first development - Why, how and what

That also goes for applications and services. If your applications cannot communicate properly, you’ll never be able to expose the functionality that is key to a good product.

We also see the following trends in software engineering:

In all of the cases above, there is value in good communication between services. And that’s why you should practice API first development. Put your communication first!

How do you practice API first development?

Now that we understand the importance of and value of API first design let’s see how the Swagger/OpenAPI spec can help you with that.

Basically there are two approaches:

Design First: The plan is converted to a human and machine readable contract, such as a Swagger document, from which the code is built.

Code First: Based on the business plan, API is directly coded, from which a human or machine readable document, such as a Swagger document can be generated.

In this blog post I am using the Top-down Design First approach to facilitate API first development. In the last paragraph of this blog I’ll briefly show an example of a Code First approach with Springfox.

Suppose that we, Ordina, are hosting a conference where multiple technical and agile sessions will be given. Users can check session information and register for sessions. The backend service is accessed by a web application and two mobile apps. 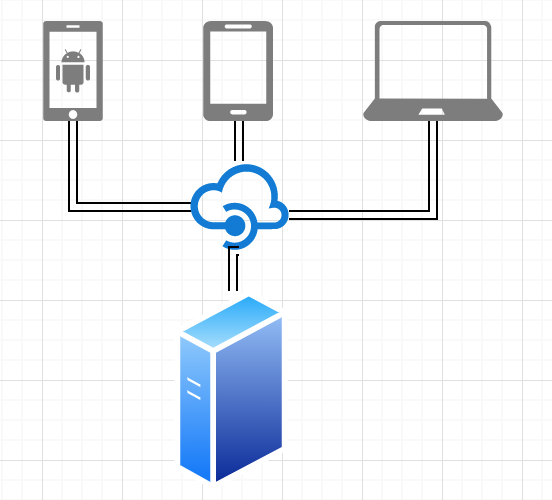 The applications are created by different teams and they all embrace the API first approach.

They read this blog and realised that by agreeing on the common interface first, they could develop separately without impacting each other. So hooray for API first development!

The functional analysts and a couple of developers of the team are sitting together to agree on how the API should be defined.

This is a crucial part of the API first mindset. We need to clearly define and communicate the API before starting to implement. Designing an API is easier when you can visualise the API. Let’s bring in the OpenAPI spec.

Let’s now use OAS to help us with our API First approach and design our API. Note that by OAS I mean OpenAPI Specification.

If you are confused about the difference between OpenAPI and Swagger, check out this page.

Time to introduce you to https://editor.swagger.io, a portal to visualise… Easy to use and offering all the functionality we need for this example.

I’ll keep it simple, we will create the OAS for exposing the endpoint to let consumers fetch the sessions of the conference.
The OAS allows you to use JSON or Yaml to describe your API. 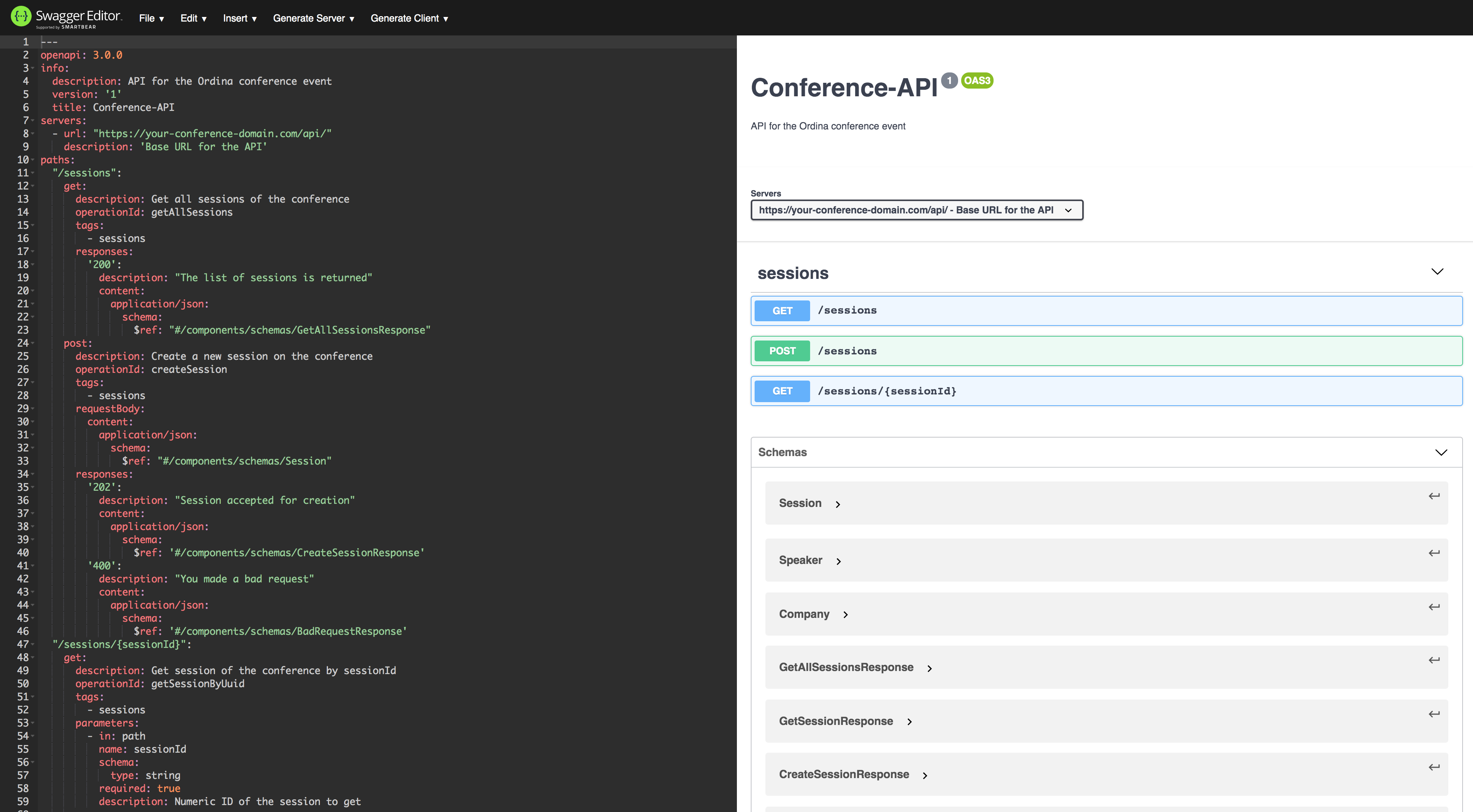 Find the descriptive yaml via this gist.

As you can see from the example, the OpenAPI specification is very readable. Even if it’s new to you, you should be able to deduct what is written in the yaml.
You like looking at raw yaml? Sure you don’t! There is a great visualisation to the right of it. This clearly visualises what your API can do. Clear visualisations mean clear communication.

The API in the example is small. When describing a whole real-world API, the file might become quite large. But that’s no problem. The OpenAPI spec allows you to split your definitions over multiple files which you can reference from within other files.

You want to expose your beautiful visualisation to your clients. They shouldn’t have to paste a yaml file in a window of their browser all the time. How do we do that? Let’s find out next.

The API specifications should be easily accessible for you and your clients. The specification which you agreed upon, should be hosted somewhere for everyone to see. Sometimes companies have there own in-house tools to visualise OAS. If your company has no such tool there are plenty of other tools to visualize your API defined with OAS.

A couple of hosted solutions: 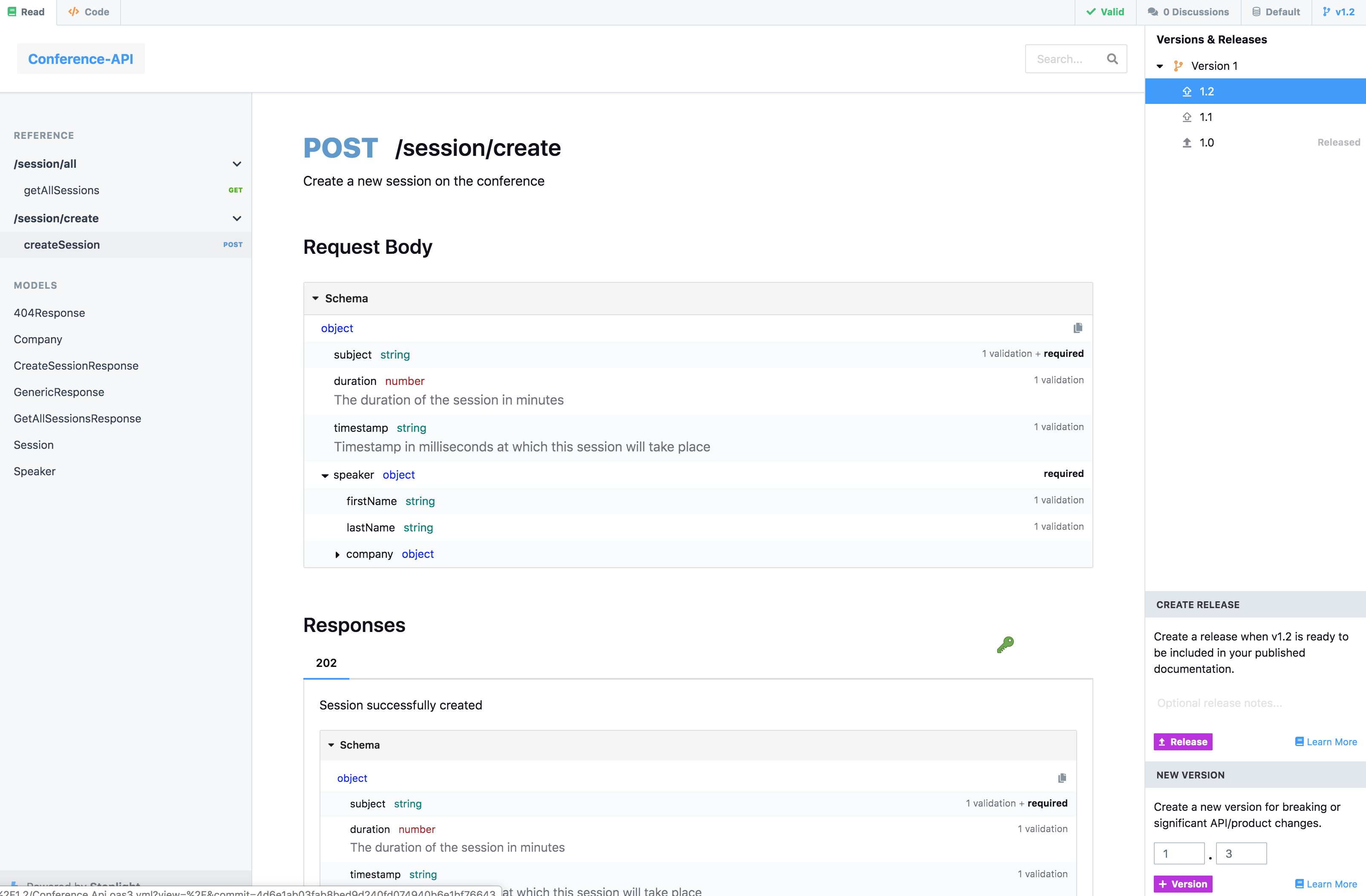 You can create a working Postman collection from the OpenAPI spec

You don’t have to tell me how difficult it is to keep a Postman collection up to date with an evolving API! More so, you have to make sure that every member of your team has the latest version of your API collection.

Good news! Postman can import a collection directly from the OAS. In the Postman UI go to import and import from raw text. Just like I did in the image below.

As you can see on the background of the image above, the request was correctly imported from the Swagger file.

Time to code!
If I write code, I might make mistakes. So let’s generate code that is completely compliant with the specs.

OpenAPI Generator is a hugely popular repository on github. It allows you to generate code that is completely in line with your API specification.

On mac you can just install the openapi-generator-cli by installing it via brew.

You can also checkout the github project, build it and use that jar.

You have the cli installed and created a directory which contains your api.yml file.

You could generate a whole project.

That would generate a whole Java project with a bunch of files. Let’s start a little smaller.

If you followed along clear the directory with

For starters we only want to generate the model classes:

Models here refer to your DTO’s (Data Transfer Objects) or Resources. These are different from your domain models or entity models.

Let’s see what we did here:

Generate is the command that we give to the openapi-generator cli to instruct it to generate the code.

The input file that contains our API specifications.

The generator to use. Here we specify that we want Java as output language.

We are telling the generator to only generate the models for our API.

If you want help or you forgot one of the options you can look here or execute:

If you execute this command you’ll see that there are a lot more options. We could for example do the following

This generates the java models without creating test classes and puts them in a package com.ordina.conference_app.model. It suffixes them with Dto since that’s what they are. These classes are used to transfer data in and out of the application (Dto aka Data Transfer Object).

Keep your generated class files in sync with the requirements of the API specs by setting the useBeanValidation option to true.

In the last example I also specified a property useBeanValidation=true.
Requirements specified in the API documentation like a required field are now translated to the code. The getter on the speaker field in the SessionDto class is now annotated with @NotNull.
You can now use a framework like JSR 380, known as Bean Validation 2.0., to validate input and output.
This is a Java specific example, but the same will happen when you change to other languages by using eg. -g python.

Now that we got acquainted with code generation I am going to show you how to include it in your build process.

Integrating Swagger/OpenAPI with your build process: maven or gradle plugin

I started a maven project and included our api.yml on the classpath. Now it is a matter of configuring the openapi-generator-build-plugin in our maven pom.xml.

I want to configure it to behave the same way as the example above.

Check out this gist for the xml.

Testing you API would normally involve setting up a larger integration test. In the case of AWS Lambda this means that you’d have to deploy your application since you cannot run it locally (Not that easily at least). Luckily we have set the useBeanValidation property to true. This allows us to write unit tests that validate the incoming and outgoing requests of our function.

After you deserialize the incoming request you can validate it against your API specs:

If some violations are detected you can return them wrapped in a 400 response. You could easily check this functionality by writing a unit test that:

The same goes for the responses. In your code validate the response against your API specifications by using the responseDto that was generated from the specs:

If this finds any violations throw a ConstraintValidationException.

Again a unit test can validate that:

Of course we want to use the specification programmatically. Suppose we create our backend service with AWS Lambda (serverless). I’ll be using AWS native tools and use SAM to deploy the Lambda functions and my API. SAM allows you to use an OpenAPI specification to create your API Gateway.

In your SAM template define the API Gateway resource by referencing your OAS.

In the Lambda function resource specify that the lambda should be triggered from this API Gateway.

Add the x-amazon-apigateway-integration extension in your api.yml to specify how the api has to integrate with the backend Lambda service.

For a full template example including the Lambda resources, check out this gist.

I promised you an example of a code first approach. Here I set up a Spring boot application with Springfox dependencies.

Implementing the API and using the right annotations leads to an endpoint of your application on which your API spec is visualised: /swagger-ui.html There is also an endpoint to download the Swagger / OpenAPI specification: api-docs

Here are some takeaways about API first development:

Below the pros and cons of practising API first development using Swagger/OpenAPI. 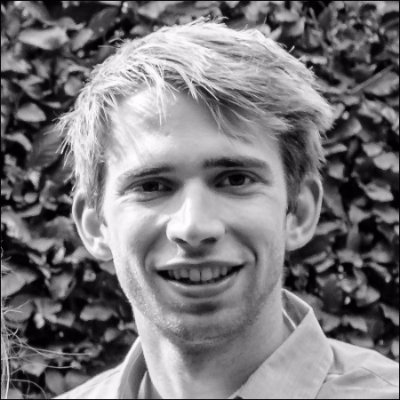 Nick is passionate about cloud technology. He has major expertise in AWS and AWS serverless but he appreciates other clouds just as well. He wants to be ahead of change and thus he’s also working with IoT and AI.